How to Make Clay Roman Coins 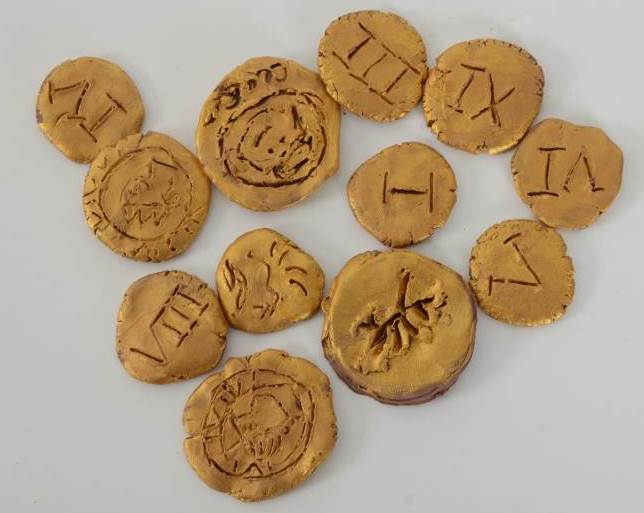 Roman coins feature symbols and iconography which represented beliefs and significant events during the Roman Empire. Coins were not just used by Romans as currency but also as a way of telling a story. These stories can be useful in helping us discover more about how they lived. Making Roman coins from clay is not only a fun art and craft activity but will also allow children to discover more about them, using their coins to tell their own unique Roman story.

After gaining an understanding of the symbols used on Roman coins and seeing some examples, children can design and make their own unique coin from clay. Here’s how:

Earlier Roman coins featured images of deitys including Roma, a female that personified the city of Roman. Later moneyers, a committee of 4 or 5 men appointed to decide which images were to be featured on the coins, began to display images relating to their family histories on coins. Julius Caesar was the first Roman Emperor to issue coins showing his own portrait but after his assassination continued with other emperors.

Do you have any more fun ideas for learning about Romans?

Below are some links with further information about Roman coins and the symbols used on them and examples of Roman coins to look at:

The Roman Baths website also has a fun app which lets children create their own Roman coin design using their own photograph.

Did you know that the Romans used the position of the sun and the length of shadows to estimate the time of day? This fun investigation is a good way for children to learn about Romans, light, shadows and the movement of the earth in relation to the sun. It […]

Studying the Romans in Britain gives some terrific opportunities for persuasive writing. In this fun activity for KS2, the children write an estate agent’s listing for a Roman villa. What would persuade a wealthy Roman to buy their villa? To complete this activity you will need Internet resources showing the […]

Make Your Own Roman Coil Pots

Making Roman coil pots is a fun art and craft activity for KS2 children which can help to bring to life a Romans topic. The hand building of pots using coils of clay is one of the earliest methods of constructing pottery and was used by Romans and a number of other ancient […]